Devin Davis sprang out of thin air it seemed, to deliver a one-man rallying cry for the lonely and for the redemptive joy of power pop. Offering up the one-man band/production team wonder, Lonely People of the World, Unite! (Mousse). There are likely a fair number of people out there who could pull off the one-man or one-woman feat, but would you want to listen to it? Probably not. And there are quite a few out there with the special specific skills needed to pull this off and to come away with something worth listening to, as Mr. Davis has; but do they have the drive, the ambition, and the insanity to jump feet first into a project like that? No. Not many would or have... Devin Davis has, he's jumped in up to his neck and he's pulling us in with him. So strap on your Speedo because Devin Davis has something to say.

I spoke to Devin via email. 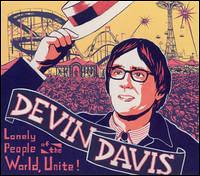 *SIXEYES: With this being your first solo album, I was wondering what the impetus was to bring the project to completion, hell, to even get it off the ground? I expect it would take a lot of confidence , but it must have been more than just that.

DEVIN: Well... I guess that I just wanted to make an album that you could listen to from start to finish... and I guess once I started... there was no stopping... meaning ... the more I worked on it... the more i had to finish it... you know?... it was like.. "I've spent a year and a half on this I HAVE to see it through or else I'll hate myself"... you know?... It was a lot of work... every day... but it was a lot of fun... creating the songs and linking them together... I don't know... working mostly by myself, I didn't really have any checks and balances... or feedback on stuff... I did play working versions for friends... and they seemed to dig it... so I guess that gave me some confidence... otherwise... it was just having to trust myself that I was "cutting out the bad parts" as much as I could... you know?

*S: Is Devin Davis your real name? And if not... what did you do with the real Devin Davis?

*S: How did the concept arise for your album, Lonely People of the World, Unite!? Was it preconceived or did it arise from the situation you were in?

Devin: I suppose that it was preconceived once I got the phrase "lonely people... etc." into my head early on... (the idea of making an album of songs about loneliness) but it was definitely a reflection of my living situation.. when I moved to Chicago.. I didn't know anyone... and as an insult to injury... lived by myself... (in a basement that flooded on many occasion.. once with knee-high sewer water... ) I spent most of my time working on the album a little bit every day...

*S: Tell me about your background, you know... birthplace, where you grew up?

Devin: I was born in Clinton, Iowa... lived there for 12 years ( I think) then moved to Jacksonville, Florida... I moved to Chicago five years ago..

*S: Where, when, and with who did you start your musical career? I'm talking early here, your first exposure playing in a band.

Devin: My first performance was in a saxophone trio in my elementary school talent show... we played the theme to the Pink Panther... I was in a band called Irving (no relation to the current band from California) in Jacksonville... we played a few shows... but could never find a steady drummer... so when that kind of fell apart.. I started recording by myself... I put out a noise/punk with synthesizer" album called "Perpetual Motion Sickness" under the name Irving Philharmonic... (Which sounds very little if at all like the new album...) It was an utter critical and commercial failure...

*S: Who would you say has the greatest influence on your songwriting?

Devin: Big influences for me during the recording of this album were early Dylan records, The Beatles, and Neutral Milk Hotel... as well as Beck and The Magnetic Fields... and the Kinks.. among others... the album is sort of an "ode to classic rock"... which I suppose is pretty obvious.. I also got really into some of the Folkways Ballads records... "On Top of Old Smokey"... etc.

*S: Just how many instruments did you play on the record?

Devin: I played everything except for a pedal steel track, some of the more complex trombone and trumpet parts... and a French horn part...

*S: What would you say you feel most comfortable at? Behind a guitar onstage or behind a board in a recording studio?

Devin: I guess I feel most comfortable at home in my little studio... I enjoy playing in front of people... but I get extremely nervous about it... it has been getting a little better with time...

Devin: I was reading a lot of poets at the time.. (Frank O' Hara, John Ashbery, Robert Lowell spring to mind)... as well as Vonnegut (probably my favorite author) who I felt kind of inspired the album's title... (Like... it could have been one of his little slogans... like hi ho!... or whatever).. I was also very moved by this book by Jon Krakauer called "Into the Wild" which is about this well-to-do kid from the East coast who gives everything away and hitchhikes up to Alaska to live like Grizzly Adams... with no maps... a purely natural existence... who ultimately dies of starvation alone in an abandoned school bus in the middle of nowhere... (true story).. It really affected me for some reason... I guess because I had always kind of wanted to do that myself... (not the starving to death part of course!) There's kind of a theme running through a few of the songs that deals with that idea... on an unrelated note, I was also very much into Monty Python episodes on VHS at the time... which I think was partly an inspiration to put in the sound effects ... I also really admire their timing and absurd juxtaposition by way of abrupt edits... Most of the songs were extrapolated from experience or dreams.... ("Cannons at the Courthouse" was from a dream I had) But I wanted the stories to be told completely out of context... like... the characters/narrators... may not necessarily be "me" telling the story ...(as in "Turtle & the Flightless Bird") nor would they necessarily be about me at all... if that makes any sense... It was a lot of fun to me at the time to write songs from the perspectives of other people... animals... etc... some of it is autobiographical though... of course...

*S: Funny you mention the Krakauer book, I haven't read it, but I have heard of and about it. I also was very taken with the idea of disappearing into the wilderness and living off the land when I was in my early twenties. It seems this may be a much more common dream than I had assumed... well, anyway, you mention dreams as a source of inspiration for some of the songs on Lonely People of the World, Unite! -- namely, "Cannons at the Courthouse"... do you jot down your dreams on awakening or keep a dream journal? Do you put much stock in your dreams?

Devin: Well... I used to keep a hand held cassette recorder by my bed (i would take it with me everywhere)... and would record any details from dreams that i could, depending on how coherent I was at the time... I also had a book that I would write in.. but the tape recorder proved much more valuable... as it could be used in the dark... my favorite recording consisted of a short mumbled recollection... followed by heavy breathing which then turned into me sleeping... mouth right on the mic... which lasted for a few minutes before I woke up again and turned off the tape. I'm still a little unsure as to what dreams really "mean"... to get into that would probably exceed the limits of this email... I know this for sure however... they always seem to be far more interesting than what's happening when we wake up, ... right?

*S: Alright, uh... speaking of dreams... what is the closet thing to being a rock star that you've experienced since the release of your debut?

Devin: well... it was kind of weird/neat seeing my picture in Entertainment Weekly... (it made my parents happy)... and I've gotten some emails from people in Europe and The UK... which was really awesome...

*S: What is your favorite venue to play in Chicago and why?

Devin: I really like playing at Schubas... as well as the Hideout... Schubas sounds great... and has a good sized room... whereas the Hideout is really small and cozy (for lack of a better word)... The Hideout is a very "friendly" place... they have fish mounted all over the walls...

*S: What do you feel has taught you more about the music business -- working as an engineer or a few days in car-choked Austin during SXSW?

Devin: hmm... you speak of two totally different worlds.. the studio is a very intimate and magical experience... at least working at home is... South By Southwest, on the other hand, was just completely insane... being around that many piss drunk people at once... an "indie-rock Mardi Gras" if you will... I would definitely love to go back... BUT... we MUST get a hotel room that is within walking distance of the stuff going on... that turned into somewhat of a logistical nightmare...

*S: And finally... what is in the works for you in the coming year?

Devin: I would really like to tour this summer... and I really hope to start working on another album... (I have a bunch of songs started...) just to get back to the state that I was in when I made this one... to be really excited about it...

*Sixeyes: Thanks for this Devin... and for the music!

+ "Iron Woman" by Devin Davis off of Lonely People of the World, Unite!
More Devin Davis mp3s can be found here.
at 8:21 AM