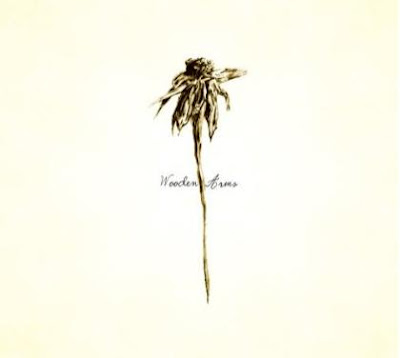 I don't think it's happened before... not to me, at least. Wooden Arms, Patrick Watson's 3rd full length is so intoxicating, so magical, that it has pushed every thing I've heard since, down a notch, or two. And it's not just Watson's voice, one that lives somewhere between the rooted grainy echo of M Ward and the soaring mercurial grace of Jeff Buckley, it's the music which carries, and is carried by, that voice.

Some music is simpler for me to understand than others, although that doesn't mean I can't enjoy it. I understand Elvis Perkins, and his great new record, and I can intuit how he came to create the music on that record, but Patrick Watson... I can't figure this out. How does he do it? And I've even wondered... why? There's something powerful here, and it may simply be the mystery, the how and the why. Mystery is very seductive, isn't it? I've been seduced by this album, from the quiet romanticism/oddness of the Tom Waits-like title track "Wooden Arms", to the carnival-esque and woozy somnambulism of "Traveling Salesman". From "Beijing" and it's fantastic musical evocation of a city humming, buzzing, and racing with the life of millions of citizens to the deceptively simple "Where The Wild Things Are".

Opening the record is the stunningly lovely "Fireweed", a song which shows to great effect just how important the talents of the other band members are. Throughout Wooden Arms, guitarist Simon Angell shows imagination and restraint, while bassist Mishka Stein displays a fluidity which never gets in the way of percussionist Robbie Kuster's strength, presence and innovation. While this quartet does push boundaries to keep engaged in the creative process, they can, and do, slip in the occasional "pop" song, such as "Man Like You" and "Big Bird In A Small Cage", the latter song in my perfect world would be on every radio in every car and home.

If 2006's release, Close To Paradise, won the band the 2007 Polaris Music Prize (Canada's Mercury Prize), then I can only imagine what awards will be earned by this new record. Highly recommended.