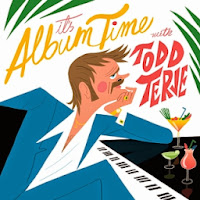 If any of you have wondered why this blog has slipped away into one of the millions of dusty corners of the internet, today I came upon a prime example of 'what' caused this... Pitchfork's current golden boy, Todd Terje.

All electronic, all disconnected... his songs off of  It's Album Time exhibit a lack of nature, a lack of skin and bone, of fingers hitting, plucking, striking an instrument of wood and skin...they are disconnected from nature. The copper wires, circuits and binary codes only strengthen the wall between natural and unreal. Oh, yes, there are rhythms and melodies, but no matter how sharp and clear they still carry a sterility borne of science's clinical heart and the cradle of technology from which they came. There are more than enough robots and computerized circuits in our lives today, just let music breathe on its own.

Will someone just pull the plug on this binary music and see if it can breathe on its own... Please?

Todd Terje's album is the sound of kidnapped acoustic music trapped in an iron lung of motherboards and drivers. Sounds to make the robots dance... I'll sit this one out.