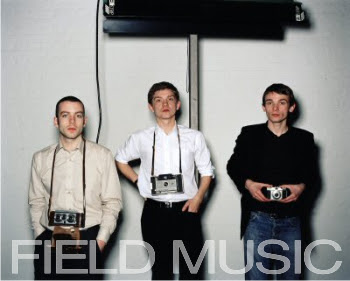 Okay. I should be beaten with an ugly stick (although, that may be redundant) or a dumb ass stick (which may be more to the point), for not getting my hands on a copy of Field Music's latest release, Tones of Town (which hit shelves in January of last year, BTW) sooner and having my ears opened to just how amazing this trio, comprised of brothers David and Peter Brewis (who previously played drums for The Futureheads), and Andrew Moore, from Sunderland, England, are. And I have Tim Elsenburg from the band Sweet Billy Pilgrim to thank, he loves the album and recently inquired if I'd heard it, prompting me to finally seek it out... so, thanks Tim. Now on to the music... their 'field' music is staggering in that it sounds utterly unique and familiar at once. Songs such as "A House Is Not A Home" and "Working To Work", amongst others, bring the best pop craftsmanship of Supertramp, and condensing it, give us what I mentioned earlier, something unique and familiar in one short and tight burst of music. When you get right down to basics they're singing tight, nearly constricted, harmonies that dip and soar fearlessly while a buoyant staccato beat pulses beneath, sounds easy enough, and some bands, namely The Futureheads, can find success with this formula, but they don't reach the peaks which this trio finds. The Shins also come to mind, but they're closer to classic pop whereas Field Music just seem odder and more eccentric... a couple of pluses in my mind. Here's how they sound and here's where you can buy the music.

Don't forget to visit that Sweet Billy Pilgrim site, not only does Mr Elsenburg have great taste, he also makes great music.

Field Music can be found at eMusic. Check out eMusic's Free Trial offer of 25 DRM-Free downloads right here.
at 8:35 PM