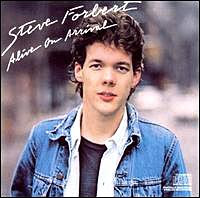 I'm not sure exactly how I came to learn of musician Steve Forbert, he released his debut Alive On Arrival 30 years ago this year, I was in my late teens and likely read a review in Rolling Stone (which, unfortunately, is a pale sickly shadow of what it was back then). There are several memorable songs on the album, songs which I hadn't heard for at least a decade, but even with the strong songwriting from the perspective of a young man from Mississippi making his way in the lonely New York jungle, it's Forbert's voice which always wins me over. It's a soft rasp, one which immediately sounds friendly, or familiar, but, oddly enough, unique. That one of a kind quality is borne in the phrasing he employs, not in an in-your-face style, he's much more subtle than that... it's the little things here and there that quietly snag like burrs in your socks.


Here's a sample from the 30 year old Alive On Arrival:
goin' down to laurel
tonight i feel so far away from home
at 4:31 AM